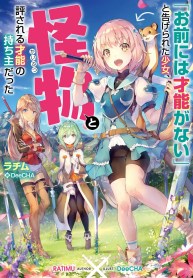 A certain girl aspiring to be an adventurer was invited to join the Hero’s Party by chance and became their apprentice. However, she was not actually treated as a real apprentice, and was subjected to physical violence and verbal abuse every day.

In the end, she was told that she had no talent and was about to be expelled from the party.

However, the hero promised the girl that if she could stay in the Demon Forest for a week, her expulsion would be revoked. Unaware of the fact that she had been tricked, the girl was abandoned in the forest without even a weapon to defend herself.

But the Hero’s Party had no idea that the girl had been observing every battle they had faced. Nobody knew of the girl’s talent.

A talent, for which even the word “genius” would be too modest to describe, would allow her to reach the realm of excellence.

The girl who was able to escape the forest soon registered herself as an adventurer, and in no time, she overtook the fierce fighters one after another.

This was a tale of the rapid growth of a girl with the strongest physical prowess.

A talented monster doesn’t need to be taught – someone once stated.

The Best Assassin, Incarnated into a Different World’s Aristocrat