“If I am going to ship it from overseas, the price will be higher. Has Your Highness given thought about this?”

Marco said in order to see if the conclusion he came to was right.

In response, a young civilian behind Mia came forward and handed him a piece of parchment.

This is… a very interesting price setting.

Mia was bubbling with happiness over the possibility of being able to buy wheat cheaply. However, there was a decisive gap between her and the general public’s senses. Her idea of what cheap is, is totally different from the public. She can be forgiven for this mistake though, as what she thought as cheap was based on the time of famine when a simple bag of wheat was enough to buy a small castle.

So, what exactly does her price even with “friend’s discount” look like to common people?

Even adding the cost of shipping it from distant lands, the price is still quite high. In this case, unless my expenses overly soar, it will be profitable.

Marco realized that Mia’s proposal was a mutually beneficial agreement. In exchange for being paid a high price when things are fine, he has to help out during famine. It is very similar to the concept of an “insurance.” Something that this world has not yet invented.

Marco, a talented merchant, read through again what was included in this proposal. He realized that the biggest benefit of riding Mia’s proposal was “maintaining the distribution route.”

Why is food expensive during famine in the first place? Of course, it is a balance between supply and demand, but even if it there is no pressure in the demand, the price of wheat will still be high. Because acquiring wheat costs money.

Example, if he tried to import wheat from overseas. Having never traded in wheat before, Forkroad Company must start by actually being introduced to the farmers who grow wheat overseas. Then they have to figure out the transportation. What kind of transport ship should I use? How should it be handled while being transported? Perhaps wheat doesn’t need a specialized way of transportation but there is still the need to know at least the basic knowledge of its transportation preservations. They need to hire a knowledgeable and experienced people.

In summary. if they want to prepare the distribution system from scratch, you need to spend money. There is a need for enormous amount of money to create a distribution flow from nothing.

But what if the distribution could be maintained, even if it was small? Isn’t it easier to widen a narrow stream than to revive a dead river?

If I can maintain even a small distribution channel, I will be able to transport it faster, smoothly, and at lower cost than anywhere else in the event of famine.

The reason why it cannot be maintained is a matter of cost. In a merchant’s perspective, it is unreasonable to continue a sales channel that produces profits only during famine. Of course, to prioritize profits, unprofitable distribution channels should be cut to save loses…

Is Princess Mia suggesting that she is going to take the burden of the continuing cost of having an unprofitable distribution system?

My God… With this system, she is giving me benefits as her business partner while also ensuring that her people will not starve.

There was no other emotion to call what Marco was feeling at the moment, except for awe.

Chloe, just what kind of person did you make a friend of?

While in total admiration of Mia, Marco bowed.

“Forkroad Company will be more than happy to sign a contract with His Imperial Highness Princess under these conditions.”

Upon hearing that, Mia beamed in happiness. 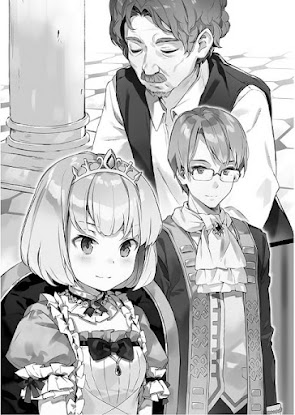 Her Highness genius truly is unfathomable.

Looking at Marco bowing, Ludwig was pondering at Mia’s further goal. When he heard Mia mentioning “friend’s discount,” he found a special meaning there.

Princess Mia gave the other nobles a reason they could live with by lowering herself.

The nobles would just oppose if they were told to stop wasting money “to keep the people from starving.” Noble ideals are incomprehensible to them. Whether the people starve or die, they are not interested. Pursuing a selfless cause is foreign to them.

But what about nepotism? Giving benefit to friends? Then the nobles can understand this because they do it themselves. So, if Mia’s goal was framed under the context of giving benefits to a friend, then it is something they can understand and empathize.

Sure, it may indeed be an injustice. They might be disappointed in her abit. But altogether they would just shrug it as a selfishness that is normal for someone with the emperor’s blood. In the common sense of nobles, this degree of royal arrogance is perceived as naturally forgivable.

No… this is not everything… This is Her Highness we are talking about… There’s more to this.

Ludwig was confident in the work that he was doing for Mia while she was away at the academy. However, he must admit that maybe he has pulled the reins on the nobles too much. Mia, who noticed this, might have tried to loosen the reins by taking the initiative in cheating herself. This level of nepotism and profiteering is okay. In fact, this kind of arrogance is needed for Mia to win their respect. It will show to them that she is one of them. Thus, they can also support her cause.

Politics cannot be limited to just being virtuous. One must know when they have used too much whip, that the carrot will be effective.

Heavenly moons! Just how much strategy is lurking in Her Highness’ head? How many steps does she plan ahead? I may never be able to fathom just how deep her thinking is.

Needless to say, Ludwig doesn’t have to fathom too deep as Mia’s head is empty.