【It’s not transparent. It seems to be a little pink?】

【I don’t know, it’s still wrapped in the matrix stone, so the light transmittance is affected. It’s not good to judge the color now, so let’s wait for the cutting to be completed.】

Liang Chao frowned slightly after seeing the close-up of Lin Luo’s cut section of jadeite on the big screen. He didn’t think that this kid’s jadeite hadn’t actually collapsed. No wonder they all said he was lucky. His good luck would have to end today, though…

Liang Chao looked at his jadeite as he ground it more and more, and his eyebrows were raised in joy. His jadeite was bigger than Lin Luo’s and the color and crystal structure were both good. This time he would win the game for sure!

He confidently put on the chrome knife, ready to make a big cut and end the game completely!

Liang Chao’s chrome knife cut vertically along the edge of the window. The window that had been ground out was the size of two palms. With this cut, they would be able to see exactly how much jade was inside.

There was no more suspense on Lin Luo’s side. Basically, once the jade was finished being cut out it would be over.

Now it was up to Liang Chao’s side to see what the results would be.

The noisy sound of stone cutting machine continued, but no one felt as if it was noisy at all. All eyes were staring at Liang Chao’s stone-cutting machine unblinkingly.

The knife cut took seven or eight minutes until finally the thick layer of matrix stone was cut off, and Liang Chao hurriedly washed the cut surface with the water gun.

Then, after the mud was washed away, Liang Chao froze in place. His hand holding the water gun trembling unconsciously, and the water splashed onto his own pants without him even noticing it.

He saw that the exposed cut surface was covered with gray stone layers. Only the top layer of jadeite was a thin layer of jade, and all the stone below that was useless.

【I feel like I’m dreaming. How did it reverse and then reverse again? My heart almost jumped out of my chest!】

【He he he, it seems like Lin Luo is going to win!】

“It’s impossible!!!” Liang Chao stared at the cut surface, pressed the chrome knife again, and cut it down towards the middle of the jadeite.

If one looked closely at his hand holding the chrome knife though, they would see that his hand was trembling slightly.

However, with this cut, another stone layer was still cut out.

His defeat was set.

There was no longer any meaning for Liang Chao to continue cutting his jadeite. The inspectors looked at the thin layer of jade and gave an estimate of 500 credits, which was considered high…

At the same time, Lin Luo’s jade was almost finished being cut. He took out a fist-sized piece of jade from the remaining matrix. The texture was fine and starchy like cooked lotus root, the color was a light pink variation of purple that variated gently similar to the hibiscus type, and it was slightly transparent.

“The jade is a lotus root starch type, light violet color[1], weighing about three kilograms, and the estimated value is 350,000.” After inspecting Lin Luo’s jade carefully, the inspector gave a final estimate.

Lin Luo won 100 points and was smoothly promoted to the advanced rank.

The audience stood up to applaud and cheer for Lin Luo. At only 21 years of age this boy once again won a perfect victory and kept his 100% winning rate.

Liang Chao, who was standing by, looked pale and lethargic.

He lost… After so much effort, he still lost…

Liang Chao couldn’t help but begin to wonder if he had chosen the wrong jadeite. For a while, he imagined that if he had just chosen another piece, he would be able to win. For a while, he resented that the person who was doing things was not reliable, and had made such a big mistake and cheated him!

It wasn’t until the staff came forward to remind him that Liang Chao recovered from his chaotic thoughts and found that Lin Luo had left the arena surrounded by everyone, leaving him standing there alone in the deserted arena.

Liang Chao gritted his teeth and walked outside.

The media reporters who had been waiting for a long time outside immediately swarmed in when they saw Liang Chao coming out, one by one rushing to interview him for his post-match remarks.

Liang Chao stood on the stairs and watched as Lin Luo squeezed out of the crowd under the protection of his assistant An Zihao, and Xing Mo who acted as his bodyguard, got into a luxury suspension car, and rode away.

There was no one around Liang Chao who could stop the reporters for him though, and he was blocked in tightly. The spectators who hadn’t dispersed were scattered around him as if they were watching a good show as they looked on at his embarrassed appearance from a distance.

Liang Chao’s expression was extremely ugly. His cheeks were flushed, and he felt that everyone around him was laughing at him, making him want to dig a hole in the ground and directly jump in.

“Mr. Liang Chao, you have been in the industry for nine years, and you lost to the fledgling Lin Luo, what do you think?”

“Mr. Liang Chao, how do you feel about the ups and downs of today’s game?”

“Fu̲c̲k off!!! I don’t accept interviews!!!” These reporters ‘ questions grew sharper one by one, which resulted in Liang Chao roaring out in intolerance.

In the headlines of the StarNet News Agency that day, in addition to Lin Luo’s victory in the challenge, there was also a clear photo of Liang Chao’s face darkened with anger.

[1] – Light Violet Lotus Root Starch Jade should look like this, though the one Lin Luo got was a bit more variated in color, so the pink would have likely been in clouds: 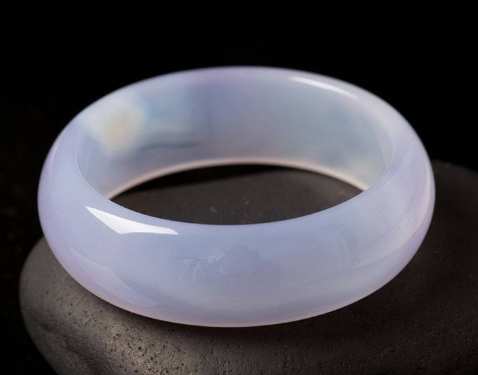