Lin Luo continued to grind the stone, and ground away at all the places that could be ground. After roughly determining the shape and outline of the jade, he drew a line on the jadeite and replaced the grinding wheel with the chrome knife to cut the stone.

The stone cutting machine made a piercing sound of ‘ZiZiZiZi’, but no one left, and instead the crowd gathered more and more people.

In less than ten minutes, the first cut was completed, and the exposed cut surface was full of a yellow of watery translucence, indicating that the cut had caused the bet to rise again.

As early as when Han XinYuan and Han XinYu saw the black mist being ground away they knew that Lin Luo had won the bet.

The two couldn’t help but regret that if they hadn’t gone into things with the preconceived idea that the piece of jadeite was bad earlier, then this piece of translucent lemon yellow jade would belong to them.

However, that was just a thought for them to mull over. After all, a piece of yellow jade wasn’t a big deal to the Han family.

In the end, Lin Luo took out a piece of lemon yellow hibiscus jade[1] of about three kilograms from the piece of rust skin jadeite, which was considered a rare color of jade.

“Young man! Is this yellow jade for sale?!” Many people heard that someone had cut a lemon yellow jade at this station and many people rushed over and began asking Lin Luo about it.

“Sorry, I want to keep this jade for myself.” Lin Luo smiled and collected it into his space button, and was about to continue cutting his second piece of jadeite.

The next thing to be cut was, of course, the thunder stone jadeite that had attracted a lot of attention.

The thunder stone jadeite was really rare. Those who came to watch the lemon yellow jade were too interested, so they felt that they couldn’t leave yet. The Han brothers were also very interested in the thunder stone.

Just when Lin Luo, with the help of Xing Mo, was about to put the jadeite on the stone cutting machine, he suddenly heard someone shouting, “Lin Luo!”

Lin Luo was taken aback by the sudden shout. Looking back, Lu Chun and Cui XueLi were walking over proudly, and behind them were a few bodyguards holding gambling stones.

“Why are you here, and what do you want to do?” Lin Luo frowned slightly.

“Hmph, Lin Luo, didn’t you want to bet against me before? Do you dare to compete now?” Lu Chun pushed aside the crowd and asked aggressively.

“Ha ha, are you trying to compete with me?” It’s not that Lin Luo looked down on him as a person. It was simply that at best this Lu Chun could only be regarded as a rock gambling enthusiast, and had no chance of winning at all in a rock gambling battle with him.

Lu Chun’s face stiffened, and then he pointed in a direction behind him and said angrily, “I will let Lu WenShan, the chief stone gambling expert of our energy company, compete with you on my behalf! Do you dare?!”

Following the direction of his fingers, people noticed a middle-aged man who was about fifty years old standing on the periphery of the crowd.

Lu WenShan was tall and thin, like a bamboo pole, but his eyes were bright and he looked quite energetic. After being named by Lu Chun, his face showed shame, and he obviously didn’t come to wage a stone gambling battle with a junior out of his own desires. He had lagged behind Lu Chun and Cui Xueli on purpose while walking, obviously trying distance himself from them.

“Why wouldn’t I dare? How are you going to compete?” Lin Luo wasn’t afraid at all.

“Each of us has three gambling stones, and we will win or lose according to the total value of the cut jade. All the jade cut by the loser will be given to the winner!” As he said, he clapped his hands, and his bodyguards placed the three gambling stones in their hands on the ground.

“Of course I dare, but I want to take a look at these three pieces of yours first.” Lin Luo wasn’t stupid. These three gambling stones were all excellent quality old pit jadeite, and one of them was a rare elephant skin jadeite. It was obvious that Lu Chun had come prepared to take his revenge. He also specially brought their company’s chief stone gambling expert. These jadeite should have been carefully selected by the other party. If Lin Luo rashly accepted the battle without knowing what he was getting into, he would be a fool.

So he asked to take a look at their jadeite first, since if you know yourself and the enemy, you’ll be safe in a hundred battles!

Lu Chun actually didn’t want to show him, but he was afraid that he wouldn’t agree to the challenge otherwise. He didn’t want to waste any more time so he reluctantly said, “Hmph, I will only give you ten minutes!”

“Okay.” Unexpectedly, Lin Luo agreed quickly and walked over to check the three pieces of jadeite with a smile on his face.

“Wait…” Han XinYu was about to stop him, but was stopped by Xing Mo.

Others didn’t know, but Xing Mo obviously knew that Lin Luo had special abilities. Not to mention checking three pieces of jadeite in ten minutes, even if he was only given three minutes, it would be enough time for him to read these pieces of jadeite.

“I agree to bet with you, but I only have one piece of jadeite now.” Lin Luo pointed to the piece of thunder stone jadeite and said, “Why don’t you choose one of these three pieces of jadeite and bet with me.”

Hearing this, Lu Chun immediately beamed with joy and strode towards Lu WenShan’s direction. Obviously, he wanted to discuss with the other party which one should be chosen to bet against Lin Luo with. 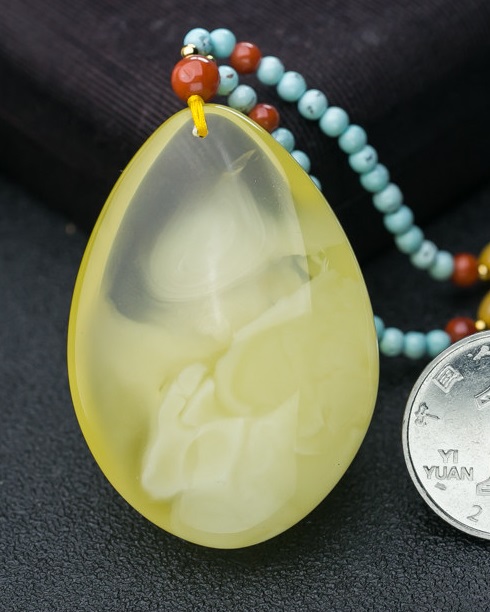