By this time the jade in the small half of Lin Luo’s jadeite was finished being cut out. It was a waxy ice type jade in a boxwood leaf green color[1], and weighed in at about five kilograms. According to the market price, it had an estimated value of around 620,000 credits.

If it hadn’t been for the fact that it was being compared to the apple green glass jade that Lu WenShan had just cut out of his piece, the jade that Lin Luo had won would normally be thought of as pretty good.

Unfortunately, as soon as the apple green glass jade appeared, everyone couldn’t help but be attracted to it. The glass type was the best jade variety, with fine structure, complete transparency, excellent luster, and no impurities. The concentration of the element liquid extracted from such jadeite was many times higher than that of ordinary jadeite.

Although apple green wasn’t counted as the top color of green jade, it was still a very good one.

Lu Chun’s eyes brightened with excitement. For his energy company to have this piece of apple green glass jade to use as a gimmick would mean that they would surely be able to attract many distinguished customers who would want to snap up the element liquid that would be extracted from it. Maybe he could even invite a senior energy engineer to do the extraction in person. After all, even a senior energy engineer wouldn’t generally get to see such a high-quality jade in their career more than a small number of times, so they definitely wouldn’t refuse his invitation.

All together, with the help of his Uncle Lu, he had been able to defeat Lin Luo who was hailed as the most famous stone gambler on StarNet of late. Not only did he avenge the previous slight against him, but he had also gotten a change to make his company famous in doing so. Additionally, he would be able to get the jade that Lin Luo had bet on at no cost to himself! It was like he had hit three birds with one stone!

【Fu̲c̲k̲, this Lu Chun is really getting more disgusting the more I look at him… Look at the wretched smile on his face! It’s a shame to lose to him!】

【Ha ha, I saw Mr. Lu secretly rolling his eyes next to him. It’s really sad for him to have such a boss!】

Just as everyone on StarNet was talking about it, Lin Luo began to prepare the other half of his jadeite for cutting.

The other half of his jadeite was larger than the one he had previously cut, so it wasn’t convenient to put it directly on the stone cutting machine. The best way to cut it was freehand.

However, Lin Luo squatted in front of this piece of jadeite to observe for a while and instead of picking up the chrome knife, he chose to grind the stone with the grinding wheel again.

【Why is Lin Luo grinding the stone? Won’t such a large piece of jadeite take forever to grind at? Most likely this half of the jadeite should be the same as the one he just finished cutting. Even if it’s full of jade, it’s no better than the glass jade from Teacher Lu… Just cut it directly and save some time…】

【Are you deliberately stalling for time? What ‘youngest talented stone gambling expert’, I think it’s a false reputation. If you can’t do it, just admit defeat!】

【Go on, you’ve got this! What blabbering! Our Luo Luo is grinding the stone because he wants to do it, so mind your own business!】

【Exactly, what a troll! Lolo was just out of luck this time! Boxwood leaf green waxy ice jade would have soared in any other circumstances. Don’t watch if you don’t like it!】

Over time, some discordant voices appeared in the barrage of the StarNet live broadcast channel, which annoyed Lin Luo’s fans and caused the two sides to suddenly quarrel.

At this time, Lin Luo was deeply focused at grinding away at the fog layer on his stone. His attitude towards this chunk of jadeite was extremely careful, as he knew that this chunk of his jadeite would give the audience a great surprise.

Xing Mo stood to the side and carefully coordinated with Lin Luo’s movements to fix the angle of the jadeite so that Lin Luo could be more comfortable when grinding the stone.

This time the fog layer was thicker, and Lin Luo spent a little longer grinding it down. When Lin Luo finally stopped the grinding wheel, there was a lot of sand and grit covering the window surface, and the situation inside was completely concealed.

Xing Mo grabbed the water gun and washed the grit off of the window surface. Once the mud had been washed away, the window gradually revealed a little dark red.

【Although it looks a little dark, it’s really red!】

【Wow, if it weren’t for that crack caused by a thunder bolt, maybe it would have formed into a two colored jadeite!】

The onlookers live at the scene, although their reaction speed wasn’t as fast as the audience members who were watching the live broadcast, soon learned that Lin Luo had sanded out red jade, and immediately began to excitedly discuss the new turn of events.

Sorry about the sudden delay in translations, I got sick for a while. Fortunately I should be getting back to my normal schedule as of now 🙂
[1] Waxy Ice Boxwood Jade, boxwood leaves are yellow edged green, so its green jade that with heavy yellow tones. This one has some slight color mottling: 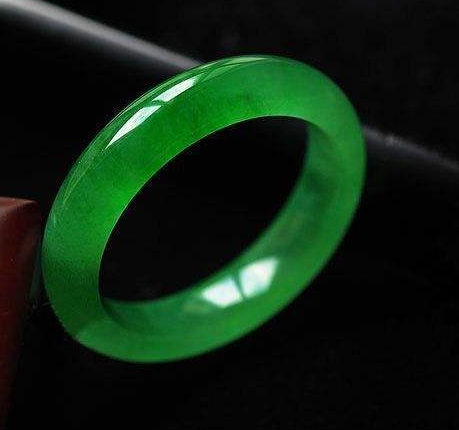