The Master of the Brave - Chapter 63

Author’s Note: In the timeline, “The Traveling Swordsman”, “Rumors” and “Vacation” occurred on the same day.

“Why would she bother to meet me here?”

Wynn muttered to himself. This was his first vacation since becoming Cornelia’s squire. Today was the day he and Leticia had promised to go shopping for clothes long ago.

“You will find me at the great fountain in the main square of the Imperial City!”

“What? Why bother going there?”
“You don’t understand, Onii-chan! The atmosphere is the key to this kind of thing!”

Wynn thought that since they would be going to the boys’ dormitory early in the morning anyway, they could meet there as usual, but Leticia insisted on doing it the other way around.

So, after breakfast at the Wandering Bird’s Nest, Wynn went back to his dormitory at the Knights’ School to get some exercise, and then went to stand in front of the great fountain in the square in the center of the Imperial City, the meeting place.

The main square was the busiest place in the capital, as it was the intersection of the Palace, the Knights’ School, the market and the east gate. There were several stores and stalls lined up around the square.

As it was before lunchtime, the square was full of people and surrounded by bustle. In particular, the place where the great fountain was located was the most prominent in the imperial capital and was often used for meetings of couples. There were many men and women around Wynn who also created that atmosphere, and he felt somewhat uncomfortable.

He was sitting on the edge of the fountain, squatting. Besides, it could be that half an hour had already passed since he started waiting.

Around him, he met other people and each one of them was heading to his own destination. Somehow, he could feel the eyes around him. He had the feeling that he was being looked at as if he were some poor guy that the person he was meeting had decided not to go.

Suddenly, the clamor that filled the surrounding area changed. It was as if the buzz that had been unbearable until then had concentrated on one thing only. Wynn looked up, wondering if anything had happened.

Leticia was standing in front of Wynn. The dress she was wearing was a pale blue fabric with pink and white ruffles. Her hair was tied back with a green ribbon.

Even in the midst of the hustle and bustle, Leticia had an overwhelming presence.

“Wow… how beautiful…”
“She looks like a princess.”
“Which house does she belong to?”

Most of the surrounding looks were focused on Leticia.

Leticia smiled smugly, paying no attention to the surroundings. Wynn couldn’t help but vaguely nod. Looking at it that way, Leticia for some reason showed a gesture of being confused for a moment and held her right hand to her chest.

Leticia took Wynn’s hand and forced him to his feet.

“What, are you kidding me? She’s going out with a guy like that?”
“Isn’t it just the forbidden love of a wealthy damsel and a boy who works as a servant?”
“Maybe she’s so rich she prefers men from other classes.”

There was a buzz of noise coming from the surroundings. Leticia firmly took Wynn’s hands and pulled him, walking with a chuckle.

‘As expected from Letty. She is used to getting people’s attention.’

Inside, Wynn was impressed, but, on the other hand, it was true that Leticia was also embarrassed for herself.

“Clothes! What should I do with the clothes? What kind of clothes would Onii-chan like?”

Since the night before, Leticia had been lost in the choice of clothes to go out with Wynn. She had even returned to the Mavis mansion from her dorm room at the Knights’ School.

As a noblewoman, there were many luxurious dresses adorned with jewels that had been given to her for being the Brave. However, there was no way she could walk the streets in those clothes. And besides, Wynn was a commoner. If Leticia were dressed in such a way, it would make him stand out. The clothes she used to wear were basically functional, prioritizing ease of movement. But this time, Leticia could not afford to wear those kinds of clothes.

And actually, there were a variety of clothes scattered around the bed. When she looked at the dresses, they were all light colors. In the end, after hesitating, she chose a light blue dress that gave her a clean and tidy look. This was the observation of the maid who could not bear to see Leticia’s impatience with the approaching meeting. Normally, Leticia did not like to be attended to by maids, but today she had decided that she would help her. She carefully combed her hair and tied it with a ribbon.

“I’m done with my usual hairstyle.”
“That way you look good too, Miss.”

Trusting the maid’s words, Leticia rushed to the meeting place. The sun was already high in the sky. The meeting place was in the center of the imperial capital Simurgh, in the square with the great fountain.

She even made an effort to designate a meeting place because she wanted to organize a couple meeting. She wanted to try it out at least once. Since it was the center of the Imperial Capital, it was full of people.

It looked like he was sitting on the edge of a large fountain and squatting. She assumed it was not a surprise, after she had made him wait almost an hour from the time she had chosen.

Leticia finally contained the urge to run to him and calmly approached Wynn. She didn’t want him to think it was childish to arrive in such a manner.

She and Wynn always went out together. This was not unusual.

‘So why does my heart beat so hard…?’

The same thing happened the other day when she had given Wynn a gift. Today, she had only chosen to meet him at the fountain in the central square, one of the most popular places for couples to meet. It should be just that, but somehow it was bringing her a very embarrassing yet pleasantly exciting feeling.

Finally, Wynn noticed Leticia as she walked in front of him, suppressing the urge to do anything else. She smiled at him.

As usual, she approached to take Wynn’s hand…

It should be the same as always. She had been doing it since they were kids, reaching out to Wynn. And yet, for some reason, she couldn’t. Instead she put her hand on her chest.

That little feeling of something hard was there.

A small aquamarine children’s ring, pierced by a thin silver chain. Leticia’s most precious and irreplaceable treasure in this world, given to her by Wynn as a child.

It gave Leticia the bravery… and the courage…

She hesitated for a moment. Then she took Wynn’s hand and interlocked their fingers.

‘I’m sure my face has a smile now that is so silly, I don’t want anyone who knows me to see it.’

Leticia pulled Wynn’s hand and walked away from him so that he did not see her face.

Her cheeks were very warm.

The imperial city of Simurgh was bordered from north to west by the mansions of the nobility and the rich, and as you moved from south to east, the upper class declined. Although this was true, those who lived within the city walls were not at all needy. Today, Wynn and Leticia visited a clothing store along the main street, which extended from the central plaza to the east gate of the outer wall. This was Wynn’s first visit to a clothing store that sold pre-made clothing, not to mention thrift stores. It was not the kind of store the rich would come to, but it was a store visited by commoners who could afford to live a little better.

When he approached, Wynn was confused, and Leticia, who was familiar with that, asked the shopkeeper to find her some clothes that would fit.

It was not a prestigious store that Leticia, as a duchess, could visit, but she liked this kind of store, since she could move around more easily with the clothes sold here, rather than with the clothes brought by the merchants who came to the Duke’s mansion to make visits. In addition, today Wynn would choose clothes for Leticia.

Of course, she didn’t think Wynn could choose women’s clothes, but she would love to let him see her and tell her if she looked good in the things she had chosen.

Leticia’s sophisticated clothes and her soft white skin clearly did not fit the commoners. Golden blond hair and green eyes and good looks. The shopkeeper, who had welcomed them, was now speechless when a being so different from the world he lived in finally came to his senses when he saw the frightened commoner Wynn at his side.

She tried on several clothes that the shopkeeper had recommended. She received a pale peach dress and a modern grass scarf that Wynn said would fit her better. When she turned around as she tried on the dress, the embroidered hem spread out softly and the scarf danced around.

The shopkeeper recommended several more, and Leticia’s cheeks were flooded with happiness as she wore clothes Wynn had liked.

“It’s a shame, I would have loved to walk with you in the clothes you chose for me…”
“It’s already impossible. Why don’t you wear it again next time we go out together?”
“Really? Will you go out with me again?”
“Of course I will.”
“Okey. Then I’ll wait for it.”

Wynn thought it would be better if they were taken to the Duke’s mansion, but Leticia insisted that they be sent to the Knights’ School dormitory. If she couldn’t walk in them, she would at least try them on in her room as soon as they were sent.

She looked a little frustrated at not being able to walk around with them on right away, but when Wynn said, “Let’s go out together again,” she smiled happily.

For lunch they ordered their food from a store they entered that sold food with meat and vegetables on bread. Looking around the restaurant, there were many young men and women, some of them seemed to be young couples, like Wynn and Leticia. The tables and seats were also set up for two people, so it seemed that the store had a clientele of couples.

The conversation between a man and a woman who seemed to be a couple, who were sitting next to each other and who were also having lunch, reached Leticia’s ears.

‘They call each other by name…’

Leticia looked at Wynn’s face as he took a bite of the food they had brought.

She stared at him, and Wynn looked back at Leticia. Leticia’s face quickly looked down at her food.

‘I want to call you by your name too.’

She had always called Wynn “Onii-chan,” but didn’t that mean he would always recognize her as his little sister?

Leticia chewed the food out of her mouth to cover herself in a hurry. Her face was burning, like hot water.

Wynn laughed as he looked curiously at Letty, who was screaming in agony in her mind. 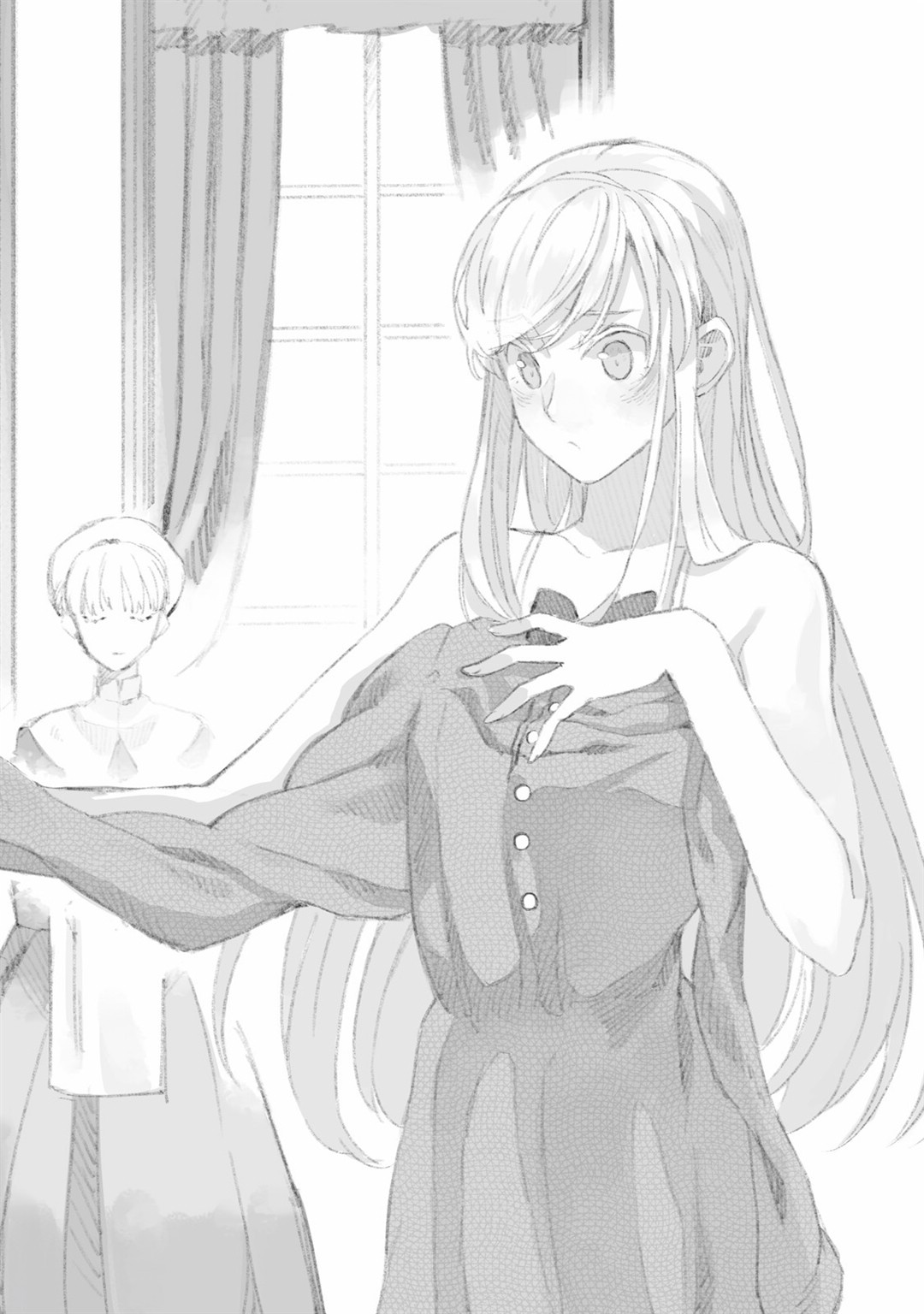