The Master of the Brave - Chapter 79

In a corner of the Imperial City, near the walls. The area surrounding the walls housed the poorest class of residents of the Imperial City. In a small stone house. A man was preparing a meal with his clumsy hands by lighting a fire in a hearth set up on the dirt floor.

When he called his ten-year-old daughter into the living room, which had only a dirt floor, she answered. His wife had died, leaving him alone with his daughter. As he stirred the pot, he turned his attention to where his daughter was mending with hands familiar with the task.

The contents of the pot were barley porridge. Also, with some vegetables added, such as potatoes, carrots and beans to bulk it up. It was a poor meal, but for a man who could not work openly due to the circumstances he had, he could not ask for more luxuries.

He carried the pot into the living room and served the barley porridge to his hungry daughter, who smiled at him. A knocking sound echoed at the door of the house. The man got up quietly and picked up a sword that had been placed in a corner of the living room. When he saw that his daughter had stopped eating the porridge and was looking anxiously at her father, he patted her head reassuringly and went to the entrance.

With his sword drawn and held in his right hand, he opened the door just a little.

It was a familiar face. He loosened his expression and relaxed his whole body which was tense. Seeing this, the daughter, who had an anxious expression on her face, began to eat the porridge once again.

The visitor handed the man a bag of coins. The contents were enough for the father and his daughter to live a modest life. Compared to the amount of money the man used to earn, it was only a small amount. Right now, however, he could not afford to demand more.

“And a message from that man: ‘I’m sorry for the inconvenience I’ve caused you. Please be patient.’ That’s all.”
“Please, I don’t deserve such words.”

The guest nodded with a mysterious expression on his face.

“Have you been training…? No, that was a silly question…”

Just by looking at the muscles in his arms peeking through the man’s shirt, you could tell he had been training. He couldn’t devote time to his work, as he spent more time working out than he used to.

The guest pulled a package from the pouch hanging from his waist and presented it to the man. He leaned his sword against the wall, and when he received the package, it was quite heavy. Looking inside, it was fresh meat.

“Boar meat. Feed it to your daughter.”

The man bowed his head at these words. Meat was a luxury item. He hadn’t eaten fresh meat in a long time.

With that, the guest left. The man, who had had his head down until the guest left, closed the door and looked back into the living room. His daughter was looking at the package her father was holding. She must have heard the guest say “boar meat.” The man looked at his daughter’s face, which was somewhat expectant, and said:

“Tonight we will have a feast.”

His daughter’s face lit up.

The morning market was taking place in the square in front of the south gate. The morning air was filled with the scent of roasting meat, spices and freshly baked bread. These smells wafted through the alleys, and many people came and went.

A series of simple stalls lined with tents, with foods such as meat, vegetables and spices, suspicious medicines and useless knick-knacks and ornaments, were arranged on the sidewalk, and shopkeepers shouted to attract the attention of customers.

“I was surprised that it was different from the image I had. It’s a lively and fun place.”

Cornelia murmured as she looked at the various products lined up in an odd way.

“Anyone can open a stall here as long as they pay for the place. So, in addition to the citizens, there are also people living outside the walls who open their stores.”
“But, above all, you have to get up early in the morning.”

“It’s worth getting up early.”

“Hmm, not bad morning air so full of vitality, huh?”

Seri looked back as she walked ahead of Leticia and Cornelia.

The voices of the merchants and the chatter of the customers on the street were full of enthusiasm to sell and buy good things, and Cornelia’s body naturally felt like it was full of vitality.

“Is it always like this?”
“Usually yes. When I first came to run an errand, I thought there was a festival, too.”
“Onii-chan was coming to shop after his morning training, wasn’t he?”

Leticia looked back. Wynn was walking behind the three girls.

“Oh, yes. After the running workout.”
“Your body is well trained, isn’t it?”

Seri said admiringly when she heard that he was getting to work after such rigorous training.

“After training, I used to get really hungry. Letty used to drool in front of the stalls.”
“What, that’s not true!”
“If you looked at them eagerness, the shopkeepers used to give in to your gaze and give you some food.”

“Come to think of it, Paul-san also mentioned that Leticia-san was always eating something…”
“Ugh…”

Even Cornelia said something about that, and Leticia was unable to retort. She sent a reproachful glance at Wynn, who was the one who had brought up the whole topic, and he turned his gaze to the surroundings in a manner as if it had nothing to do with him. Those around him and who had been watching them also turned their eyes.

Leticia and Cornelia wore simple clothes, such as shirts and pants, but they were very noticeable because of their distinguished features and their atmosphere, which was different from that of any commoner. Seri too, who had elven blood, so she was no slouch in appearance either. It was inevitable that they would gather stares even if they were just walking. And it was even more inevitable if they put on a scene that made them bring out a smile.

The market was so crowded that people were bumping into each other, but when the girls approached, the crowd dissolved on its own, making it much easier to walk around. The reason Wynn walked behind them was partly because he attracted a lot of envious glances, but also because it was easier to walk if he followed behind them.

Seri suddenly ran toward one of the stalls. At the stall she went to was a woman in her thirties and a girl of about ten, perhaps her daughter, who was helping.

“Good morning, ma’am!”
“Oh, if it isn’t Seri. It’s been a long time since you’ve shown up here, so I was worried about you. I was wondering if you might have gotten sick, or if something related to the kidnappings had happened to you…”
“But I’m in good health, you know? Although I had been told not to go out much, because of everything that’s been going on.”

“Yes, yes. Seri-chan is so cute. I’m worried about her getting kidnapped too. Look, your clothes are messed up again. Come here.”

The shopkeeper, who had just set up her store in a simple, narrow stall, pulled her daughter who was wandering around closer and adjusted the hem of her long clothes.

“Lina, you’re a good girl. You’re going to be all right, aren’t you?”
“Yes, Mommy worries too much.”

“So, what are you going to bought today, Seri?”
“Ma’am, I’m not shopping today. Actually, they want to talk to you about the kidnappings…”
“Okay, fine. They want to talk? It’s very noisy here, though…”

After arranging her daughter’s clothes and nodding with satisfaction, the woman looked at Seri again with a questioning expression on her face and noticed that, before she knew it, a crowd had gathered around her store.

And in front of the tent was a beautiful girl of incredibly beautiful appearance, whose golden hair shone in the morning sun and whose eyes were like emerald jewels, and a girl of soft beauty that was not inferior to her own and who wore a somewhat noble atmosphere.

“Wow… uh… th-these are the people you wanted me to talk to?”

The woman, who was momentarily taken aback by the two girls, managed to squeeze out a few words for Seri, but her tone was slurred. They were clearly not simple customers. They were wearing simple clothes, but they made her wonder if they were just dressing up. In particular, she was also trying to hide her daughter’s identity, so that made her think about it even more. Anyway, she approached the two girls a little nervously, wondering what the two people who clearly felt out of place to her, the stall owner, looked like.

The woman asked with trepidation, but the answer to her question was something she hadn’t expected.

The woman, Laura, was widely surprised when suddenly the blonde girl called her name. And then her daughter, Lina, who was also called by name, jumped out of the tent and ran towards the blonde girl.

It was then that she noticed a young man standing behind the girls. He had a kind look on his face, and his eyes widened in surprise.

Hearing that voice, Laura’s mind linked the young man scratching the back of his neck as if embarrassed in front of her and the girl holding her daughter, Lina – Ifelina, with the adventurers she once asked for help, a boy and a girl.

“M-My goodness! Wynn, Letty, is that you? You really have gotten big…”

Laura was moved to tears by nostalgia. When Cornelia and Seri saw the four rejoicing at their reunion, they looked at each other, not knowing what their circumstances were. But seeing the four looking so happy and nostalgic, the two also felt warm somehow. 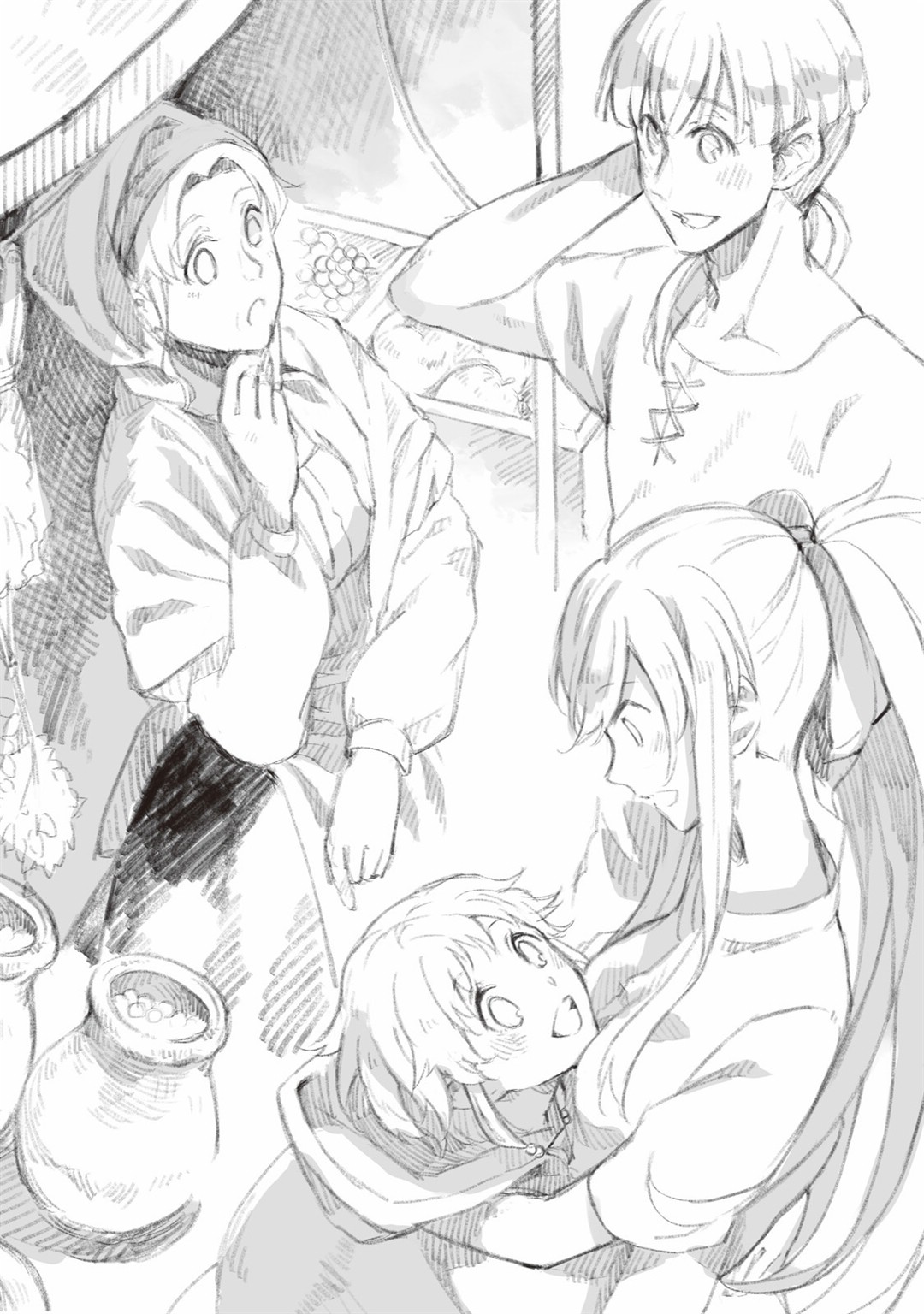